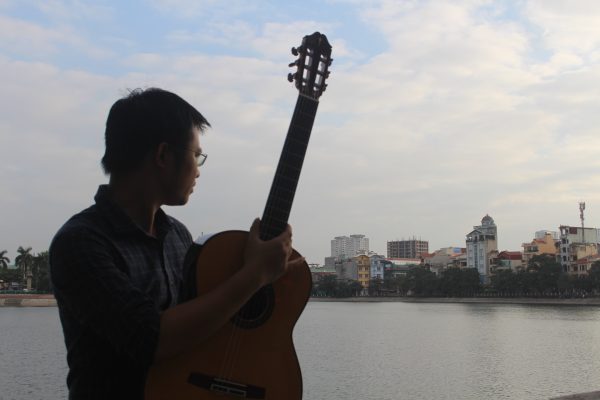 I am Vu Hien, born in 1983 in Hanoi. I began to learn classical guitar from a very young age, learned through many famous teachers but until the age of 25 I really feel good and technical to play the guitar.

Playing the guitar as well as learning the guitar is not just about getting the right notes, the beat, or the soul. The problem is that we have to play the piano in a subtle and natural way. The guitar training base in our country follows a path that has been around for years, we always emphasize the unnecessary things such as the sound of loud loudspeakers, fast fingers … but not really. , non-trivial music like that. Like a leaf falling lightly to the surface of the lake, or a light wind that leaves the leaves … we have to create such a state, we need to reflect and put our soul, personality at each note. music, every piece of music.

My website works for the purpose of introducing the essentials of guitar learning and the enjoyment of classical music-a kind of music that is so great and close to us. I want to bring a little bit of knowledge to help you want to learn guitar somewhat recognize the good, the simple things are always in music, life in general and how to play guitar in particular.

In May 2017, I was invited to judge and perform at the Altamira International Guitar Competition held in Bangkok.

In October, 2017, the first international festival in Vietnam named “Alma Hanoi international competition” was organized by I was the founder and organizer. The festival has taken place with the participation of many talented international artists such as: Spain, Russia, Korea, Thailand, Vietnam. The Festival was a great success, and as Le Thu said at the press conference, “from here Vietnam Guitar is on the international guitar map.”

In 2018, I plan to hold 5 nights with the participation of Vietnamese and international artists. There will be a combination of guitar and percussion, cello, violin …

October will continue the Alma Hanoi Festival the second time with scale and quality than before.

In November, Vu Hien will go to Thailand to participate in the Bangkok International Festival of rich expansions as judges and performers.

In December, Vu Hien was honored to visit Andalucia Spain to attend the Festival as a judge and performer, this is also the home of Andres Segovia – great guitarist who has put the guitar as a musical instrument equal to the music. the most classic instrument.

Dream: I have a dream to bring the guitar closer to the masses of the capital in particular and the country in general. Through the performances, festivals … we have more exchanges with the international guitar, from which there is more learning, more advanced professional skills. And there are many more wishes that I can not write or say, a short life is not enough to go all the dreams but I am happy because at least my children grow up will be proud of it . They would think that his father had no meaningless life.